The guy with a black bandanna wrapped around his face and cradling a stuffed E.T. doll had asked the police officer standing guard at the entrance to the United States' most isolated and secret military base what would happen if he put his dusty foot just beyond the gate. The officer, clad in desert camo and sunglasses, responded to his question with a question of his own. The man in the bandanna clarified that it would be "just for the video, not really storming." The officer remained unmoved.

It was Sept. 20, and I had come to middle-of-nowhere Nevada to see how many people would actually show up for the "storming" of Area 51, an event that started as a social media joke, then got very real.

Area 51 is the U.S. government's ultra-secret base utilized for, well, secret stuff—stuff the government would prefer to keep murky. A few of the confirmed past projects have included development and testing of Cold War spy planes. In modern times, the Predator and Reaper drones that currently bomb terrorists, funerals and weddings alike across the Middle East were probably tested at the installation. But other operations are a mystery. As author Annie Jacobsen stated in her book on the base, "The idea behind a facility like Area 51 is that dangerous top-secret tests can be conducted there without much scrutiny or oversight."

Thus, more nefarious government cover-ups and conspiracies are lodged in the legend and lore at Area 51. Some believe the Apollo moon landings were faked and filmed at a studio there. Another theory proposes a "tube-shuttle tunnel system" connects the facility with military and nuclear installations across the country. Most notably, alien spacecraft—potentially from the 1947 Roswell crash—are being reverse-engineered and possibly flown in the restricted air space, and corpses from the same crashed craft are kept on ice at the site. Maybe living aliens, too.

In July, someone named Matty Roberts, from Bakersfield, Calif., posted a Facebook event called "Storm Area 51, They Can't Stop All of Us," calling for believers to gather in Rachel, Nev. (pop. 54), the closest thing resembling a town near the facility, and storm the most top-secret of military bases. With the rallying cry of "Lets see them aliens [sic]," the event soon attracted hundreds of thousands of RSVPs. Once 2 million Facebook users clicked the "Going" button, two FBI agents paid Roberts a visit.

He said he was just joking about the "storming" deal, and quickly partnered with the owner of Rachel's motel-restaurant-tourist stop Little A'Le'Inn to host a music and alien weirdness festival called Alienstock. But less than two weeks before the event, Roberts severed his relationship with the folks in Rachel, fearing a "Fyre Fest 2.0" and "a possible humanitarian disaster in the works," because Rachel supported nothing resembling an "infrastructure." Instead, he decided to host his own festival in Las Vegas.

But it didn't matter. Roberts had created an internet movement, and potentially hundreds of thousands of people were coming to Lincoln County, whether he, the Little A'Le'Inn or the authorities wanted them to or not.

So, with a bag full of Oregon pre-rolls, cans of food, Kind bars and 6 gallons of extra gasoline, I hit the pavement south, ready for an extraterrestrial-themed version of Mad Max: Fury Road.

By several estimates, about 3,000 alien-lovers attended the Alienstock Festival. I met travelers who had driven in from all over the United States, and others who flew in from France, Spain, Scotland and Scandinavia. The largest demographic seemed to be media—YouTubers, vloggers and "real journalists." There must have been 30 documentary crews, and it was tough to walk around without screwing up someone's shot or interview (sorry about that one time, Telemundo).

The dusty tract where we stayed hosted hundreds of vehicles, a scant few portable toilets, and occasional whirling dust devils that would obscure your vision and get in your teeth as they rolled through. Lots of people came up from Los Angeles, clad in cheesy T-shirts reading, "I Stormed Area 51." Clean-smelling tourists from Vegas, in a shiny Hertz Escalade and rented REI tents, came for one evening and promptly left the next morning. One of the featured standup comics was hustling gas for $10 a gallon—he had brought 25 extra gallons in jerry cans from the Midwest.

Alienstock also featured music, and several hundred attendees frequented the two stages. Alien-masked B-boys flanked sequined DJs on a flat-bed semi trailer used as a stage. But the music was secondary to the main activity of sitting around in the desert and talking of "storming" and "freeing" the aliens—along with smoking weed and drinking alcohol. I asked several attendees what they would do with the aliens once they were freed, and the most consistent answer was, "Get them fucked up!"

During the festival, I made three trips to the base via a 10-mile, mostly gravel road. Area 51's "camo dudes" were supported by law enforcement agencies from across Nevada—state police, sheriff's deputies from surrounding counties, even park rangers. All had volunteered, and all seemed to enjoy the unusual duty. As a parole officer told me: "I've lived my whole life in Las Vegas and never been here. This is awesome."

The gate was as photogenic as you have seen online, with a constant parade of visitors taking selfies lined up right next to the barrier separating them from a $1,000 fine and a year in federal prison. There was a mom and dad with six kids, and a group dressed as scientists in biohazard suits and masks. A large man wore a giant, green duct-tape alien head that looked impossible to breathe in. A pair of furries arrived with a dog and tin-foil hats. But right then, no one was actually talking about storming the gate and running the 30 miles to the research facility at Groom Lake.  There were no stormers, but several were detained and/or arrested for pushing their luck with "the line"—the dude that pissed on the Area 51 sign kinda deserved it, to be honest.

I know you all wanted to see a shit show. I know you wanted to scroll Twitter threads and read about a Fyre Festival in the shitty Nevada nuclear desert. But it wasn't like that. Logistics were strained, but the toilets were cleaned regularly and water was always available. The 10,000-plus vehicle traffic jam never materialized.

In fact, an organic, hippie-ish vibe developed at the festival. Head-banded Naruto runners practiced their dashes, blasts of colors in yellow and red across the sand. I saw a group of 20 chanters, sitting cross-legged in the dust, channeling the captive aliens' energy, the meditators transforming and expanding it to send right back and help gain the extraterrestrials their freedom. I pictured large, bulbous heads glowing and throbbing with light as they lay on slabs, somewhere deep underground—I had been told this was the aliens' current state.

As I walked around the site, I was handed several free beers and ice-cold water bottles, and a very decent cold brew coffee, with real live ice cubes. I took joy in handing out 1-gram pre-rolls and appreciated the smiles that followed. Maybe the icy aliens 40 miles away at Groom Lake sent their cosmic, positive vibes, and their energy of kindness and grooviness enveloped Alienstock. It's almost as if the aliens fucked us up.

I mean, if you believe in all that bullshit.

(All photos by Doug Kenck-Crispin.)

Related: We Went Looking for Sasquatch in Portland. He Wasn&#8217;t Hard to Find. 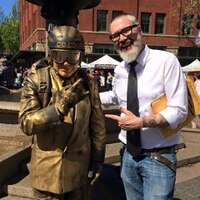 Doug Kenck-Crispin is the Resident Historian for the podcast Kick Ass Oregon History. His book of the same title will be released by Timber Press in August 2020. Doug studied the History of the Pacific Northwest (BA, MA) at Portland State University.