It didn't take long for the world to take notice of Lizzo. Only a few years removed from her independently released debut album, the Minneapolis singer-rapper has notched a hit single with the body-positive banger "Good As Hell." Her major label debut, 2016's Coconut Oil EP, poised her for world domination. Before she brings her self proclaimed "black girl magic" to Waterfront Park this weekend, here are five things you need know about her.

1. She collaborated with Prince.

Prince's 2014 album, Plectrumelectrum, features Lizzo on "Boytrouble," a women's anthem marked by Prince's signature funk fl air. Sophia Eris and Claire de Lune, who performed with Lizzo in hip-hop group the Chalice, also sing on the track. Prince gave the women free rein with their contributions. Lizzo told Paper magazine the pop legend advised them to "treat it as if it's your song," and did not make any changes.

Remember those funky black-and-white jumpsuits André 3000 wore on the Outkast reunion tour? One was emblazoned with the phrase "Big Girls Are Beautiful to Me." In response, during her performance on The Late Show With David Letterman in 2014, Lizzo wore a shirt that read "I Feel You, André." Later, André displayed his jumpsuits in an exhibition titled I Feel Ya, in reference to Lizzo's shirt.

Lizzo – Bus Passes and Happy Meals [Live on… by eidurrasmussen

3. She guest starred on an Adult Swim show.

Brad Neely's Harg Nallin' Sclopio Peepio may have lasted only one season, but it boasted some serious star power. Lizzo, André 3000 and Father John Misty all appeared as musical guests during the show's 2016 run, performing original songs composed by animator and titular creator Brad Neely. Lizzo contributed her talents to four of the season's 10 episodes, singing songs with lyrics like, "One time, man, I saw on the TV a bunch of ninja warriors/And man, they be swingin'."

4. She has toured with everyone from Sleater-Kinney to Har Mar Superstar.

Lizzo opened for Sleater-Kinney on the band's massive reunion tour in 2015. It's actually a perfect pairing—the riot grrrl legends invited Lizzo along because she, too, is punk as hell. And good as hell, of course. Her most recent album, Big Grrrl Small World, and the Coconut Oil EP feature some real bangers, but even before formally launching her career, she dabbled in music beyond genre boundaries. Experimental rock? Check. Electro-pop and soul? Double check. Plus, she sang with goofball soul singer Har Mar Superstar's band, in addition to opening for him on tour. A talented grrrl, indeed.

5. She has the most brilliant idea for the Super Bowl halftime show.

It all started with a stroke of brilliance in the form of a Twitter thread outlining her campaign for next year's Super Bowl in her home base of Minneapolis. "#WeWantLizzo" took over Twitter in support of her plan, which includes a tribute to Prince, 300 women running onstage in underwear that transforms into nude bodysuits, and an epic sing-along of her hit single "Good As Hell" as Juicy Lucy burgers fall from the sky. As National Public Radio put it, Lizzo should—nay, must—play the Super Bowl LII halftime show. We want Lizzo! 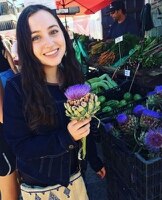 Taryn Nobil is a senior at Northwestern University, just outside Chicago. She studies Journalism and loves music almost more than she loves dogs. An internship at MusicfestNW presents Project Pabst led her to Portland. Taryn prays at the altars of Jessica Hopper and Killer Mike.