Not those kind of concentrates—although one could be forgiven the confusion in light of an upcoming collaboration of Corvallis heavy hitter Block 15 and Eugene "water pipe" artist Doom Glass.

"We've worked the last several years on really pushing what we can do with hop extract in the kettle, to have it provide hop flavor and aroma and almost a mouthfeel to the beer," says Block 15 founder Nick Arzner.

The result is Block 15's DAB Lab series ("DAB" in this case an acronym for dank-ass beer): a project launched by the 9-year-old brewery to showcase its dedication to these CO2 extracts and even newer concentrates like cryogenically harvested lupulin powder, a yellowish substance obtained from oil- and acid-rich glands on the hop flower.

Block 15 makes a lot of great beer, from fruited sours to its cult-fave IPA Sticky Hands. But Hop Hash isn't just our favorite, it's the one that best shows how the brewery is pushing the local beer scene forward.

Hop Hash uses lupulin powder from Simcoe and Citra flowers, along with Mosaic CO2 extract, resulting in a hazy, juicy brew with the notes of all three hops unfolding brightly as if through a kaleidoscope. Explosively aromatic with citrus, pine and tropical fruit, it's unmistakably hoppy, yet without the assertive, bitter punch one might expect from a beer loaded with so much plant matter.

"You're not getting a lot of the vegetal mass," explains Arzner, "so we're able to use a lot more hops but still have a bright character."

The CO2 extraction process—also popular in the cannabis industry—operates much like traditional distillation, but with carbon dioxide in place of hot water or steam.

Pressurized CO2 is pumped into a container filled with plant matter (in this case, hop flowers), with the pressure turning CO2 what's called "supercritical"—meaning it takes on liquid properties while still remaining a gas. Because of these liquid properties, the CO2 in turn functions as a solvent, pulling the oils, resins and acids from the flowers. This allows the entire operation to take place at a much lower temperature than distillation: 95 to 100 degrees Fahrenheit, as opposed to up to 140 to 212 degrees, resulting in unprecedented purity, aroma and flavor.

Though CO2 extract isn't exactly new ("the Belgians use it for good kettle yields and balanced bittering," explains Arzner), Block 15's foray into adding it for flavor has persuaded suppliers to provide them with specialty products that weren't previously available on the market.

"We've been using CO2 extract even before you could get variety-specific runs of it," Arzner says. "Now I can get Apollo, Centennial…suppliers know we're pushing the boundaries."

And so does the public, as it turns out—Hop Hash has proven a hot commodity at pubs and growler shops throughout Oregon ("Right up there with some of our most-loved IPAs," says Arzner), so if you're lucky enough to spot it on tap, be sure and cancel any immediate plans and order a pint or two.

Juice Joint, a blend of modern, tropical-fruit-forward hops and old-school, assertive varieties like Columbus, will be the next in the series, followed by another round of Hop Hash.

Arzner assures us the DAB Lab plans to keep experimenting as long as its mission continues to resonate with beer lovers: "We just wanted to put it out there and say, 'Yeah, we're using hop extract. We like it—we love it, actually—and we're making really good beers.'" 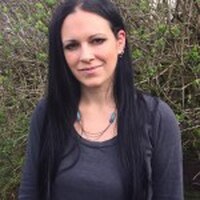