Bar of the Year 2017: Bar Casa Vale is a Dream of Spain a Decade in the Making

Casa Vale has become one of Portland’s most fully realized bar experiences, one of the few places in Portland where everything is hitting its mark.

Clyde Common was supposed to be a Spanish restaurant.

While backpacking around Europe during college, Clyde founder Nate Tilden had fallen in love with the tapas and pintxos bars of the Basque and Catalan north, where each drink came with a small bite of exquisite anchovy or skewered pork cooked in a country fireplace, and where funky dry ciders poured out of vast skins.

"I wanted to do this for Clyde Common," Tilden says of his now decade-old spot at the Ace Hotel. "I was like, 'I want a big hearth fireplace and smoky grilled meat.' But it wasn't possible. There was this five-story hotel overhead."

But for 10 years Tilden carried the dream around in his head. He wanted to make a casual drinking spot built around the warming fire of a hand-laid hearth, where cocktails and food are bound together the same way they are in the Spanish countryside—centuries-old sherry traditions sharing table space with diaphanous slices of jamón Ibérico de bellota straight from the hock.

In the former green room of legendary inner-eastside music venue La Luna, Bar Casa Vale is finally that place. It is also Willamette Week's 2017 Bar of the Year.

Casa Vale is a cozy, sultry hallway of a bar composed of odd little nooks—lit dimly by hurricane lights, southern sun and the flicker of fire. Somehow, there is something for everyone here, whether late-night happy-hour bargain hunters downing piri piri wings and $6 sherry-spiked Old Fashioneds, couples on dates marveling at the sensuous textures of jamón Ibérico over glasses of aged Spanish wine, or old West Hills couples reliving their honeymoon with amontillado sherry and a truly transcendent grill-charred tendril of Spanish octopus.

"This was my vision of a town I want to go to in Spain," Tilden says. "It might be Asturias, or maybe I haven't been there. It's my vision of that Spanish mentality."

But perhaps because Tilden doesn't give a damn about being authentic—Casa Vale also makes one of the city's finest daiquiris—his bar is the first Portland place since the much-mourned Collosso on Northeast Broadway to capture the carefree, drink-fueled romance of a night out in the bars of Granada or San Sebastián, where you drink and eat standing up and your napkins drop to the floor. 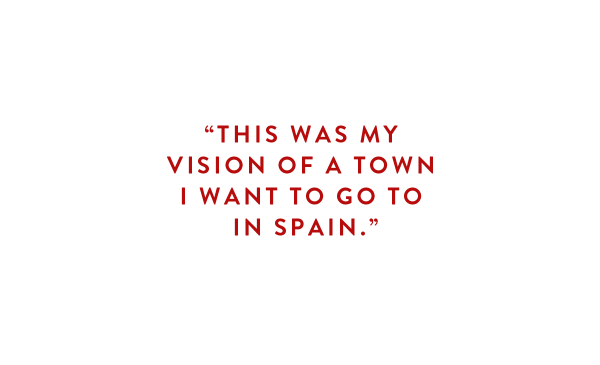 "I don't love being in restaurants a lot of the time," Tilden says. "There's a certain pace to things. I like to pop into the neighborhood spot and get a quick bite, have a great cocktail and bounce. I feel like if we have another B-to-B-minus meal at a place that's trying to impress people with their cheffy skills—I think people get tired of that. I know I am."

Like Naomi Pomeroy's cocktail spot Expatriate, Casa Vale encourages both serious drinking and casual eating. Chef Louis Martinez's food menu is designed to let the ingredients speak for themselves. "Anybody can overpower things with strong spice," he says, "or grab tweezers."

After jettisoning main plates and embracing Casa Vale's identity as a bar—and also dropping ambitious mistakes like a whole pig snout—Martinez spent six months refining a menu of perfect drinking food, mixing in Spanish technique with his own Mexican heritage in a beautifully carbonized tendril of Spanish octopus rubbed with the spice he might use in chorizo, or a lovely brined game hen slathered with a pepita mojo that's essentially a mole.

But though the bar's ease and the newfound focus of its hearth-cooked menu now seem almost effortless, Casa Vale almost tanked as soon as it opened this past October. It was supposed to crack its doors in the summer, but instead ran months over time and budget.

"We were literally arguing about the color of the brass screws on the bar," Tilden says. "I don't usually yell, but I lost it in June—I said, 'We're out of money. If we don't get this thing open, it'll be 2017 and we'll be dead.'"

Right after the bar finally opened in October, Trump was elected and Portland shut down for nearly a month of snow. "There was the snow, there were nine nights of riots downtown," Tilden says. "I was looking at Clyde, at Olympia Provisions, at Spirit of 77—in 10 years, I've never seen a fourth quarter so shitty."

The bar's hidden location, tucked in a downslope parking lot off Southeast Sandy Boulevard, made things worse. Bryon Adams-Harford, Tilden's front-of-house manager and sweat-equity partner, quit in January—weary, Tilden says, of going back to the funders with hat in hand so he could buy produce and liquor.

But Casa Vale kept tinkering, throwing on a late-night happy hour and building out for a patio that will expand in the summer to a sherry-cobbler-fueled party in the sun. Six months in, the crowds have begun to catch on.

Casa Vale has become one of Portland's most fully realized bar experiences, one of the few places in Portland where everything is hitting its mark, whether a braised rabbit, a deep international list of beer and wine and sidra, a wine-happy cocktail list deepening bourbon with fig and vinho tinto, or a Negroni with a splash of cava. It's a rum- and sherry-fueled party far from the staid tableside tapas that have come to define Spanish spots in Portland.

Bar Casa Vale is at 215 SE 9th Ave. (at rear on Pine Street), 503-477-9081, barcasavale.com. 5 pm-midnight Tuesday-Saturday. Bar Casa Vale and WW will hold a Bar of the Year party Tuesday, May 23, at 9 pm, with free pintxos and free pours of Wildcraft Elderberry Cider—plus the patio opened out to its full glory. \