Century is the most ambitious bar Portland has seen in years. But it was almost a disaster.

When the bar group behind Jackknife and Bye and Bye broke news it planned to open a gigantic two-story sports bar, rooftop hang and wedding-party event hall, the plan was to crack Century's doors by summer 2015.

But summer passed, and so did fall, and then winter. Construction seemed to have stalled soon after they installed a giant portrait of sports legend Jim Thorpe on the Southeast Sandy Boulevard exterior. When you asked co-owner Jake Carey—the guy behind Dig A Pony—when Century would open, he started to get a sort of stricken look on his face.

"Dreaming it up and making it happen were two different things," says John Janulis, Carey's partner in the project. "The city did not allow stadium-style seating in a dining establishment. They hadn't seen it before, so they didn't want to let it happen."

Then, the rooftop patio had to be specially reinforced with massive steel beams, and all of Century's bleacher seating had to be wheelchair accessible, requiring an elevator. A buildout supposed to take six months bloomed into two years.

"We wanted something that wasn't a traditional sports bar, and we didn't want TVs plastered everywhere," explains Janulis. "We didn't want to just have a bunch of seats on the ground, either."

Once it finally opened in the summer of 2016, Century exploded into one of the most dynamic bars the inner east side has seen in years—on its very first night.

That night, June 16, it was Game 6 of one of the most contentious NBA finals series in history. We're seated in a row of wooden bleachers that look like they were lifted from a high school gym, and all around us, Cavs fans are laughing their asses off. On five projector screens suspended from the ceiling, Steph Curry is being ejected from the game for sullenly throwing his mouth guard at a fan. In the bleachers facing us across the room, dejected Warriors fans grow quiet, as a roar explodes from our section with every shot. 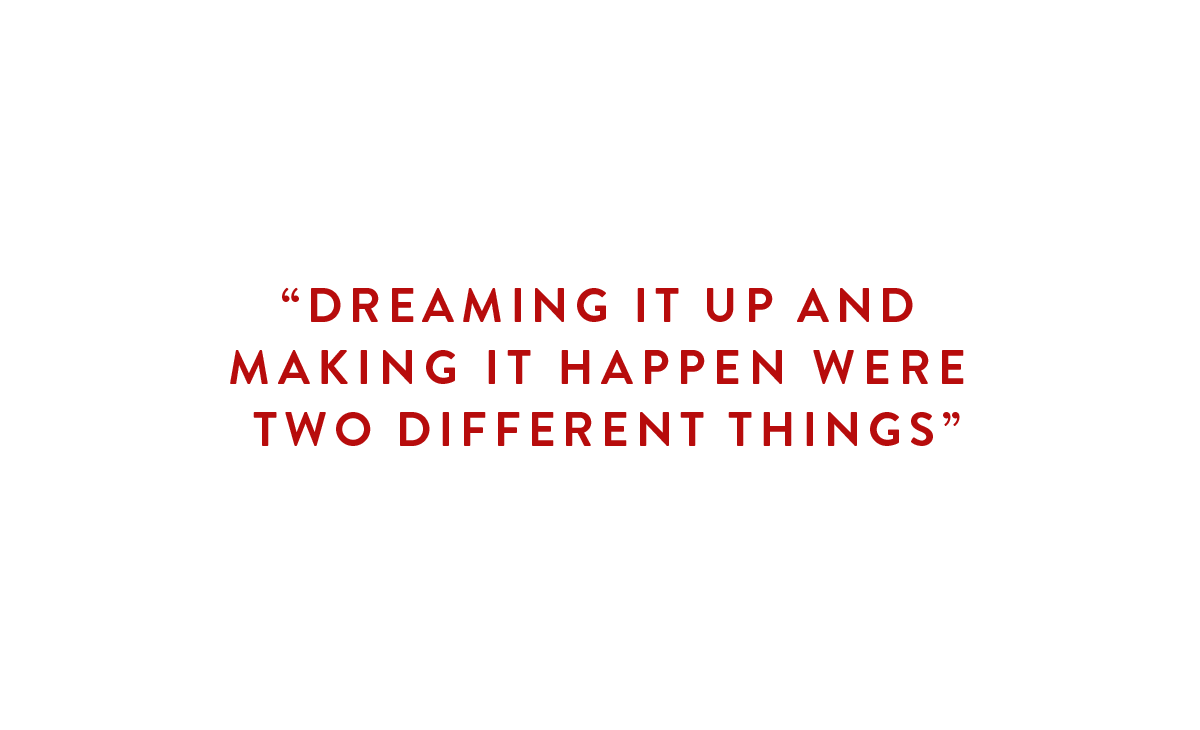 We're all facing the screens in the room's center, but we're also facing each other. It's as close to being at a live game—or a bloody cock fight—as you could ever get at a bar.

In front of the main stadium and bar area—which, depending on the evening, serves as host to sporting events, trivia, movies or as of recently, karaoke—is a smaller, perpetually busy front bar. Step outside and you'll find yourself on a triangular patio with bench seating and a fire pit, above which is a spacious rooftop patio that looks out over the Willamette and downtown Portland.

Wander into Century on a weekday afternoon and you'll see tattooed ad-agency types relaxing over cocktails and plates of gently upscale nachos from a vegan-friendly menu. When game time rolls around, Blazers-capped dudes in immaculately clean Jordans file in for beers while DJs spin during commercial breaks—a sports-bar stroke of genius if ever there was one. Come in late on weekends and Century is a line-out-the-door nightclub.

Though it possesses an almost frenetic energy and outsized concept, Century is a bar made by its details. You'll notice a conspicuously tequila- and mezcal-heavy cocktail program—the bar has an unofficial menu of more than 50 tequilas and a dozen mezcals—designed by general manager Nate VanDeventer, who developed a love for the spirit while working at Matador.

"When we were thinking about Century's menu, I wanted to go with what I like," says VanDeventer. "We wanted to make a couple of drinks served in big vessels, so people could sit for a whole movie or sporting event and not have to get up and go to the bar. We found 24-ounce Mason jars; not huge, but big enough that you can sit. We developed cocktails that hold up to dilution for them."

Or, take Century's vintage furnishings, which give it something of a midmod futurist touch. You may notice the off-white fleur de lis-patterned tin pressed against the back bar—found in an old brothel in Redmond and pressed flat under the wheel of Janulis' pickup truck. The wooden chandeliers are vintage, and the wooden latticework covering the speakers and windows is made from leftover mahogany. Those wooden bleachers are reproduced from an old wooden bench now stored in a crawl space. "We believe it's from an old bowling alley from the '30s and '40s," says Janulis. "We took it apart and had it computer mapped."

But at its heart, Century is still the best place in town to watch the mind-blowing, competitive spectacle of big-game sports—Olympics and championships, the things that matter.